To share your memory on the wall of Harold Bristol, sign in using one of the following options:

To send flowers to the family or plant a tree in memory of Harold James Bristol, please visit our Heartfelt Sympathies Store.

Receive notifications about information and event scheduling for Harold

We encourage you to share your most beloved memories of Harold here, so that the family and other loved ones can always see it. You can upload cherished photographs, or share your favorite stories, and can even comment on those shared by others.

Posted Sep 07, 2020 at 05:50pm
My prayers go out to all of the Bristol family in the loss of Harold🙏 I worked for Harold for awhile at the Varsity Barber Shop. He was an amazing boss! May you rest in peace Harold🙏
Robin Reuss
Comment Share
Share via:
JP

Posted Sep 06, 2020 at 03:41pm
Harold was my barber from 1963 to 1988 until we moved from Sparta to Rockford area. So sorry for your loss. Even today when I visit downtown Sparta and see the Varsity Shop building, I think of Harold and am reminded of many pleasant visits there.

Posted Sep 05, 2020 at 05:26pm
Condolences to the family. Harold was a staple just off Main Street and at church. May you grieve well for this family man Godly man, and a good barber.
Comment Share
Share via:
TH

I worked with Harold in his barber shop. I have thought of him so often. What a genuinely kind, considerate, generous and truly wonderful man. I actually looked up his phone number about a month ago. Now I wish I had called. I hold the memory in my heart. I am so sorry to the family for your loss. You are in my thoughts and prayers. Tina Hicks 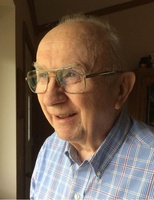